The five artists participant, Nancy Cohen, Fran Kornfeld , Ursula Clark  and Junia Flavia d’Affonseca (above) and Sylvia Schwartz (not shown), share a common bond; they have all done work in handmade paper at Dieu Donné(*) at some point in their careers.

Their backgrounds and artistic disciplines are highly diverse, but in each case, personal experimentation and development led to a distinct interpretation of this ageless medium, and expanding its possibilities.

There is yet another connection here; many of the works included in the show evoked some aspect of the natural world, and Papers, by its own nature, facilitates and amplifies the overall effect achieved by all of the artists.

The love for the music is also another connection; based in that, Junia Flavia (and later Ursula) played flute during the event, inside the space, and later expanding outside the gallery; an enjoyable moment – for the presents and for he people just passing by – in a beautiful afternoon.

visitors outside enjoying the day

we all loved it

Group of friends with Junia outside 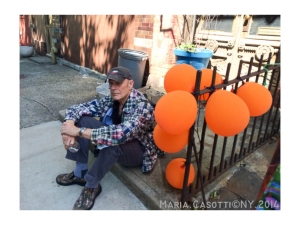 After the event I went for a little walk, impressed by the surrounding, still during the daylight, to find interesting things to photograph; I’m sharing here with you too. Congrats everybody, enjoy the photos, and leave your comments.

this fence guards a very “fancy”home…

this other one has history

every building has plants

(*) Dieu Donné is a non-profit organization dedicated to the creation, promotion, and preservation of new contemporary art utilizing the hand papermaking process.

This site uses Akismet to reduce spam. Learn how your comment data is processed.

The Art of Photography